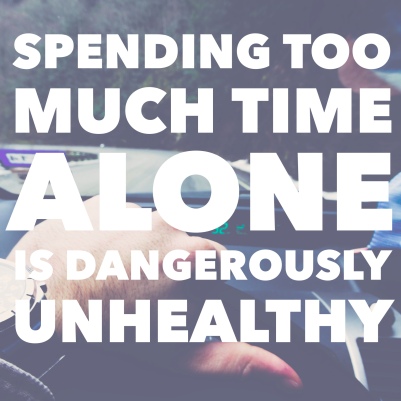 I’ve learned I am much happier doing nothing with someone than doing anything by myself.

Its true. I think that is because humans, much like many animals, were just not designed or meant to live alone. Now don’t get me wrong, I think being alone sometimes is important and certainly needed, especially for an introvert like myself. I would argue however, that being alone for long periods of time is not just a bad idea, but straight-up unhealthy. Let me explain.

I am the type of person that “recharges” when I spend time away from other people. But just like with iphones, if I leave it recharging too long, the battery begins to wear and over time the iphone (myself) looses the ability to recharge the way it was meant to.

The problem with spending too much time alone is after enough time, there is a tendency to only think about me. This is expected I guess, because there is no one else around to think about. What inevitably ends up happening in these long periods of isolation is I somehow trick myself in to believing that all space in my space and all time is my time. I begin to feel entitled. I start to become short-fused and much more frustrated by other people who infringe on my time and space (especially in traffic). The problem with this is, there is no one around to contend with this lie I have convinced myself of – that I am the best and most important person in my world. This lie, given enough time, roots itself deep into my being and I slowly become more unaware and even less curious of the other people around me. I become more and more self-centered and am only in-tune to my needs rather than accepting the reality that I am not the only person in the universe.

You can see how this is a problem.

To put simply, being alone makes me behave like an ass. And nobody wants to be around an ass. Henceforth a vicious cycle of being alone manifests itself, and if one is not careful, the damage can cost many unhappy years of living life alone and bitter because the world is not catering to ones needs.

One thought on “Lesson 7: Spending Too Much time Alone is Dangerously Unhealthy”